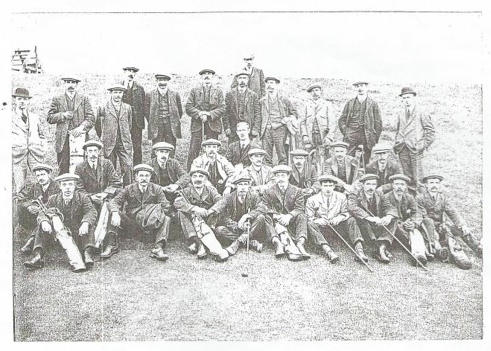 First ever record of a gathering of greenkeepers from around 1904, taken somewhere in the East of Scotland. This photo was given by Ian Forbes, son of JL Forbes, the man in image with no hat on, who organised this gathering

The first gathering of greenkeepers that we know of took place somewhere in the Lothians area of Scotland.

The photograph shown is a group of greenkeepers enjoying a golf outing around 1904. Among them is John Forbes – or Johnie as he was known – of the Stewarts Seedsmen Company of Edinburgh.

In 1894 a company was established in Edinburgh, trading as Low and Stewart and supplying seeds and plants to farmers, estate gardeners and horticulturalists. In 1899 Low left the firm and J C Stewart was joined by John Lockhart Forbes. This company would become well-known as Stewarts (Seedsmen) throughout the golf industry.

J L was an international rugby player representing Scotland as a centre and also a keen golfer. Like his counterpart in England, F G Hawtree, he encouraged and assisted greenkeepers to meet, both to play golf and – more importantly – to talk with each other and advance their knowledge of their chosen career.

John’s son, Ian Forbes, succeeded him in the company and was very well-known among greenkeepers. He was a regular lecturer at greenkeeping meetings, as was his son Graeme Forbes in later years.

We are almost 100% certain that the first greenkeepers’ association was the Scottish Greenkeepers’ Association (SGA), formed at a meeting held at Broxburn in West Lothian in 1908.

John Forbes was the secretary and it would appear that the Forbes were very closely affiliated with the greenkeepers. Johnie encouraged and supported them in their efforts to make the association successful.

Unfortunately, all records of this association were lost during the Second World War, when the Stewart company works were utilised as a fire-watching post.

In one of the lecture booklets published in the 1920s, the president, Mr Mark, intimated that the SGGA was formed in 1911, so we presume that was when the name was changed from SGA to SGGA.

A vintage view of Royal Dornoch which was 'sown with Stewarts' Stronghold grasses, an early sales brochure declared

Meanwhile, in the south of England a young man named Frederic G Hawtree started a career as a greenkeeper at Sundridge Park in Bromley, eventually becoming head greenkeeper. He also worked at Acton Golf Club.

Fred was an ambitious young man and he moved into consultancy and started selling products needed on courses.

He also become involved in construction and laid out the greens at Crohamhurst, working with James Braid, who was responsible for the design. This, of course, led to the formation of the FG Hawtree company, suppling golf courses.

He then went into partnership with J H Taylor, of the Great Triumvirate fame, in the company known as Hawtree and Taylor Design and Construction. JH Taylor had actually started his working life as a greenkeeper at Westward Ho.

Fred was very keen on education, not only for himself and his family, but for all greenkeepers. In 1912 he, along with others including WH Smithers, Arthur Lacey and Tom Bridges, formed the Golf Greenkeepers’ Association (GGA). His main purpose for setting up the association was his desire for greenkeepers to get together to learn from each other and through education.

At first, the GGA members were from clubs around the London area, but soon a Northern Section was formed.

FG Hawtree and JH Taylor were also responsible for forming the Artisans’ Association as they were keen for golf to be open to as many people as possible.

From 1908 to 1986 there was some form of Scottish greenkeeper’s association operating. Over all those years there have been many people who have put in a lot of time and effort, quite often at their own expense and in their own time, and all to improve the lot of the Scottish greenkeeper.

Some of the men that were involved in the SGGA in bygone years, their names have drifted into the past but due to minute books and records they need not be forgotten completely. I would say to all sections and regions, please keep your minutes and records up to date and in good condition.

Some of the people that were prominent in the years we cover are:

With any association, the success or failure often depends on volunteers and others who are fervent in their desire to see their association go from strength to strength. This was certainly the case in years gone by and remains so today. Many individuals have sat on all the various section and region committees, all wishing to do their bit to help their fellow greenkeeper. There are always the certain few who will do just that little bit extra and to all of them we should be eternally grateful.

This document is intended to be a living history of greenkeepers' associations in the United Kingdom. If you have any information or photographs that you would like to add, email [email protected] and use the subject title History of Greenkeepers' Associations.
Hidden
Hidden