What was the impact of the 2020 golf boom on your course?

Golf experienced a boom in 2020, but what did that mean for the nation’s greenkeepers?

BIGGA recently worked with Sports Marketing Surveys to quantify the increased footfall on golf courses when they reopened in the summer of 2020, to gain an understanding of the extra strain on the UK’s golf courses.

The results are astonishing, with 15 million extra rounds played on golf courses across the country during the summer, amounting to more than 180 billion extra footsteps.

During what has been a terrible crisis for the country the upturn in golf’s popularity is a welcome positive. Our members have struggled through some difficult times over the past year and the recorded boom in player numbers will have provided much‑needed revenue to golf clubs. A recent survey conducted by Contemporary Club Leadership quizzed 25,000 golf club members and revealed that the number one priority among golfers is the quality of their golf course. That data clearly suggests that the priority of any club should be in ensuring the golf course is as good as it can be and the greenkeeping team have the tools available to enable to work efficiently and effectively.

The golf boom in 2020 was clear for all to see, but what exactly did it amount to? John Bushell is managing director of Sports Marketing Surveys, which is a specialist market research consultancy that provides comprehensive analysis in more than 100 sports across Europe and the United States.

John said: “I’d first like to take a step back and offer a little context. At the start of 2020 we were already seeing golfer numbers in the UK back up to 3.1m, which was the second consecutive year of growth. We’d seen almost 500,000 people joining the game since 2017. We’d also seen big growth in female participation by 18%, up to over 450,000 golfers, which is back to 2011 levels.” 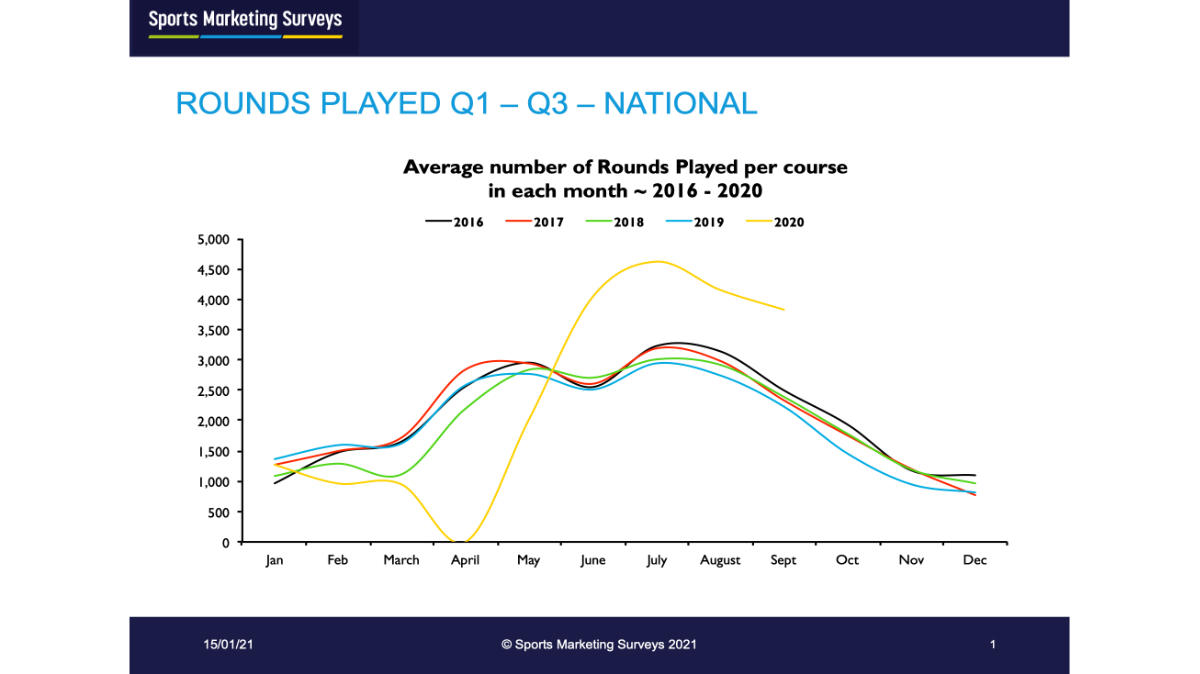 With the first UK lockdown coming into force in March 2020, an SMS survey discovered that 11m adults began doing exercise at home, so people’s behaviours were changing as a result of the pandemic.

John added that golf wasn’t the only sport to see an increase in participation when the world began to open up. He explained: “Cycling, for example, saw sales in April to June rise 63% on the last year and when you look at market data reports for January to November, total sales are up by 46% in cycling. The sports that thrived were ones that can be done on your own and socially‑distanced.

“Golf has really benefitted from that and not just in the UK. In America we’ve seen that rounds played, as reported by Golf Datatech, were up 13% by the end of November. Public courses increased 12% and private courses were up 19%, and we’re seeing that UK rounds played by the end of quarter three – having had a shutdown for most of March and April – were showing a growth of about 7% year‑on‑year. That’s an incredibly strong boost back, which is showing that golf has managed to benefit more than many sports from the COVID‑19 situation and we’re in pretty good health.”

In May 2020, BIGGA conducted a survey among its members that asked for information about how golf clubs had utilised the UK Government’s Coronavirus Job Retention Scheme. The average number of greenkeepers furloughed per golf club was 3.5. With greenkeeping teams on average featuring 6.5 members, that amounted to more than half of the greenkeepers in the country – more than 9,000 individuals – asked not to come to work for an extended period of time.

Placing 3.5 members of the team on furlough amounts to the golf course losing more than 130 hours of work each week and even when golf clubs reopened, an average of 1.9 greenkeepers remained on furlough. With the Government’s Job Retention Scheme extended until April 2021, many clubs are still running with a smaller team than normal.

This loss of labour on the golf course was offset to some degree by the closure of golf courses to the public and during 2020 a total of 295 days was lost to enforced closure at golf clubs in the four nations of the United Kingdom. However, that also means that the 7% increase in golfer numbers was focussed on an even smaller period of time, increasing the pressure on golf courses and their teams.

Richard Payne is director of SMS and he explained what that meant for individual golf courses. He said: “You have to bear in mind that last year we had a pretty appalling January, February and March just in terms of the weather, let alone then coming into the pandemic, so when we started 2020 we were already down in numbers going into the lockdown. If you just take the figures from the point when we came out of lockdown in May to October, golf courses were on average 6,000 rounds up.”

To gather this data SMS spoke to 250 golf courses from all around the United Kingdom and discovered courses hosted an average of an extra 1,000 rounds of golf per month compared to the previous year. Accepting that the number of steps taken by a player during an 18‑hole round of golf is approximately 12,000, that amounts to 12 million more footsteps on golf courses per month since the end of the spring 2020 lockdown.

Richard added: “Now obviously more footfall means more people playing, more traffic and less time for people such as members of BIGGA to get out there and repair the golf course. You have to consider not only the number of footprints, but the more golf is played the more divots will be taken or pitchmarks that are created.”

Richard estimated that a golfer will make around 8 to 10 pitchmarks per round, which adds up to between 8,000 and 10,000 extra pitchmarks per month. Likewise, a par golfer will hit on average 18 shots into the green, leading to 18,000 extra divots that must be repaired.

“So actually,” concluded Richard. “For BIGGA members, we can see that increase in golf, in terms of increased footfall and in terms of the boom we’re describing, it has actually led to a huge increase in the amount of work that greenkeepers have had to do.”

Put another way, an extra 1,000 rounds of golf per month on a golf course is approximately 32 extra rounds every day or the equivalent of 16 twoballs, 11 threeballs or eight fourballs. To accommodate this, between one and two additional hours of start times would be taken up every day, meaning an increase in the maintenance required but a reduction in the time available to do it, coupled with the ongoing reduction in staffing numbers as clubs took advantage of the furlough scheme.

Over the coming months BIGGA will be doing what it can to raise awareness of these numbers to make golfers aware of the situation and how the presentation of the course may be impacted as a result.

Per course per month