Why are you digging up our greens again? 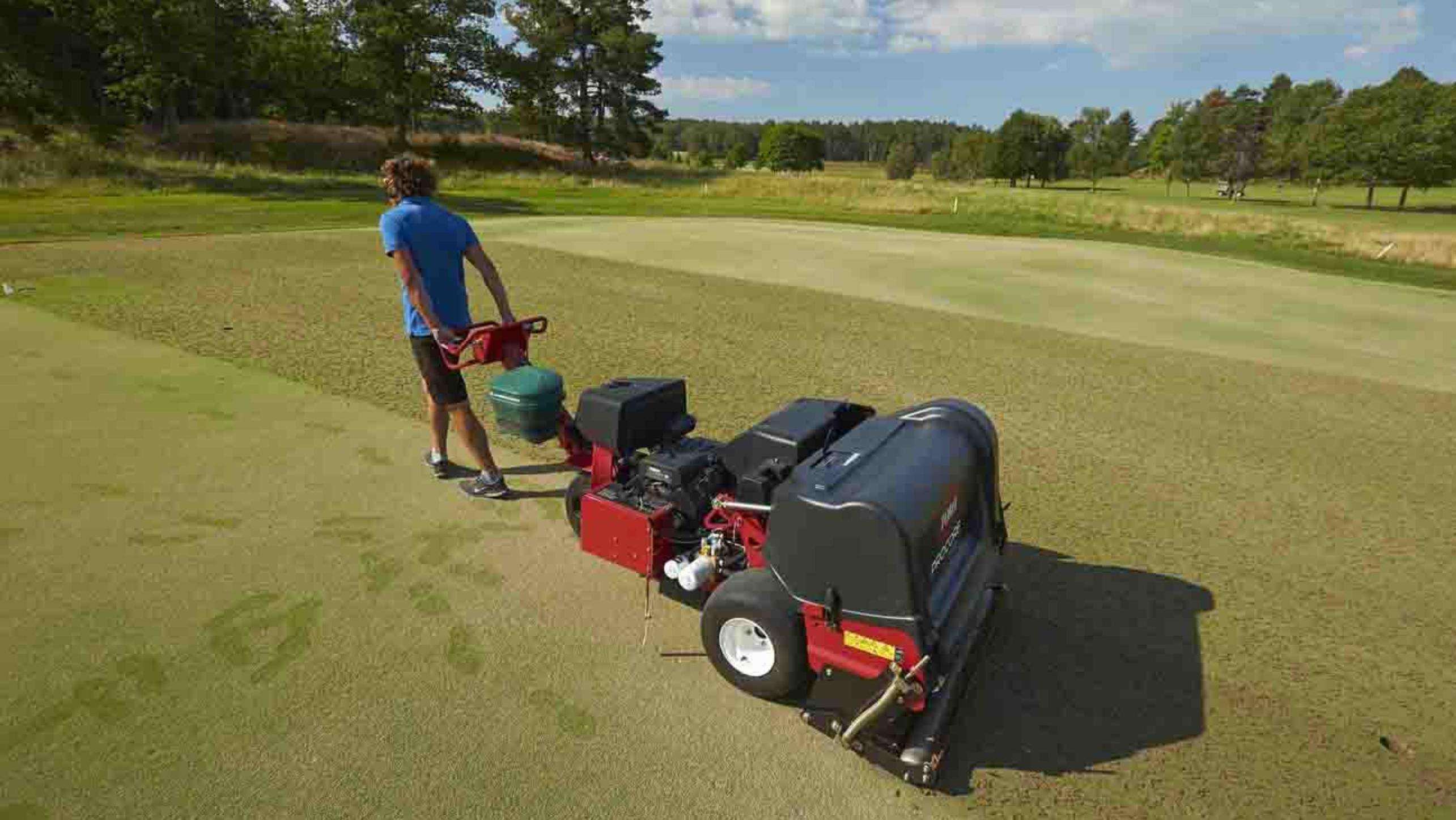 Aeration is one of the greenkeepers’ most powerful means of improving turf quality, but many golfers have little understanding of what’s actually going on.

For golfers, the first time many of us become acquainted with the practice of aeration is when playing a competition and finding a green covered in holes or, perhaps, draped in sand.

How many of us, instead of moping into the bar to complain about the bobble on that putt that was definitely going in, have stopped to ask our greenkeeper why they do the work and what its purpose is?

Why do you need to aerate?

The main thing you are trying to do is create air down to the roots. Because the soil is a lot more tightly packed (in greens), roots and moisture find it difficult to move through. If you can create as much air space as possible then roots, water, nutrients – everything can congregate in those areas and lead you to better strength of grass.

Why would you aerate greens and how often?

We like to do something every month to the greens. Whether it’s from the smallest hole right up to something that’s a bit more visible.

It’s mainly to keep the airflow going into the base of the greens and into the roots. It’s not too deep or invasive in the summer. We do one main, what we call, renovation in August and we do a second in the autumn. It’s normally any time in October. That’s where we are quite aggressive and put a lot of sand down behind it. That’s mainly to help with drainage and infiltration.

It’s vitally important you aerate. If you seal the surface, you end up reducing the chances of your grass to grow. We need lots of grass on there to keep the playing surfaces nice and tight and rolling smoothly.

Does it happen elsewhere on the course?

We also use a Verti-Drain on the fairways, tees, approaches and some carries. We try and aerate as much of the land as possible.

The only other aeration, except for greens, is that we would hollow tine tees and approaches occasionally to try and reduce thatch areas and help moisture through the top.

Has the timing of aeration changed?

At our course, we used to do a lot of our renovations traditionally in April. But you’re just getting into the start of the season and the temperatures, certainly over the last few years, have not been good enough to grow grass – not new grass and especially the types of grass we are trying to encourage, which are the finer bents.

We’ve moved away from that idea of going in spring and waiting two months for the grass to grow.

What we now do is lay off a little bit in spring. A lot of us have moved to August where we can almost get a three-week turnaround in grass growth.

For the member, the less time they are playing on secondary surfaces the better.

Is another reason you do it in August to keep the greens playable all year round?

Yes. We try and operate our greens all the time they are available. The only time we would close them is when we’re working on them or when we have a prolonged period of frost. If we can’t move the holes on a five-day period we will move to our temporary greens.

It simply wouldn’t be possible without aeration. We’ve got better at doing it as well. We know where to target and when. It’s absolutely vital we aerate. There’s no getting away from it. You’ve just got to do it.

Technology has changed a lot. How has the practice evolved in the time you’ve been doing it?

When I started it was mainly slitting, hollow tining and solid tining. The Verti-Drains came into their own just as I started greenkeeping. The availability and variability has increased now. There are things like star slitters and slight changes to those machines.

The Air2G2 has come in and sub surface aeration has been fantastic. It hardly makes a mark on the top surface but, in the summer months, can provide a lot of air, and a lot of cooling air, to the roots.

That really helps stimulate growth and keeps things going during those really hot periods as well as allowing drainage in the wet periods.

The other machines that have got better over the years are things like the scarifiers. They reduce thatch but also help with infiltration as well. The quicker you can get that water off the top, the drier the surface, the better the grass, and the longer in the year you can play on that surface.

It’s an inconvenience for golfers but you say it’s vital for the health of the greens?

One of the key combinations is the top dressing side of it. We’re trying all the time to get better at getting it into the ground and getting the surface playable as quickly as possible. But golfers do have to play their part, especially at a members’ club where they have got an investment in that golf course being open for as long as possible for as many years to come as possible. They have got to back their greens staff into doing as much aeration and as much top dressing and as much drainage as they can put into it – especially at our type of site, which is clay.

What does the sand do in top dressing? Is it just filling holes?

The practice has changed over the years. We used to use a sand/soil mix so what we were putting back in would match as closely as possible to the surface that we were taking out. A lot of clubs, mainly though expense, have moved to pure sand. The sand you pick tries to be identical to the top mix you’ve got and the reason for that is so that the water moves easily through the surface as well. If it starts to move in spots you get spotted growth and a lot of speckled grasses. You are reducing the quality of your playing surface quite a lot if that happens.

It’s important that the actual sand you pick is right as well. I’ve seen when it’s been cheap sand, or the wrong sand, and you end up with a sealing of the surface.

That does the opposite - it doesn’t help drainage, it discourages it.

This sounds very technical. We just see you chucking sand down and making holes?

We’ve got a couple of good research institutes in this country that have brought through new technologies. It’s not just ‘we’ll try this and see how it works’.

The STRI (Sports Turf Research Institute) are trialing all kinds of aeration and different ways of top dressing - even the way the sand is introduced into the top layer. There’s a lot of technology and science and research that’s going into these things.

We do try and keep on top of it and keep going forward.